History of the port of blyth 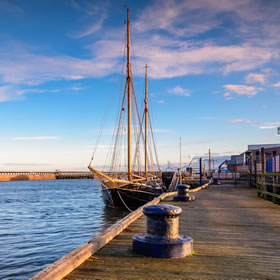 History of the port of blyth

Blyth port lies 7 miles from Tynemouth and has a history rich in commercial trade, the name of the town comes from the River Blyth. The history of Blyth port dates back to medieval times with the first chronicling of it in the twelfth century, predating most of the history of Blyth which lies in the eighteenth century. The port was very important in trade as Blyth flourished in the coal mining, ship building, salt trade and fishing industries. In Blyth’s past Cowpen was cut off from the town by a tidal inlet, found at what are now Cowpen Quay, Post Office Square and Beaconsfield Street; It was here that the salt pans formed. Although most of these industries declined in Blyth, the port is still a valuable resource shipping paper from Scandinavia for England’s paper industries.

The formal creation of a port in Blyth began in 1730, with the construction of the first elevated staith in 1788. It was also at this time that the ‘High Light’ lighthouse was constructed in Bath Terrace; it was later added to a further twice before being decommissioned in 1985 for the use of more modern navigation aids. In 1853 the Blyth Harbour and Docks Board was formed and the Harbour Act of 1858 permitted dredging to begin at the harbour; the dredging act meant that larger ships could now have access to the port allowing more coal to be exported. In 1855 250,000 tons of coal was exported, but by 1900 this had increased significantly to 3 million tons! However it wasn’t until 1882 that the growth of the port into a modern harbour began with the incorporation of commissioners enabling the port to form a Trust.

Shipbuilding in Blyth was a major trade; the earliest records of ships being built in Blyth are from 1748, but it wasn’t until later, in the twentieth century that the shipbuilding became a formidable element of Blyth port, particularly throughout the first and second world wars, where the H.M.S. Ark Royal was one of many ships built in Blyth for the Admiralty. It was also a submarine base in two World Wars; the service was granted the Honorary Freedom of the Borough of Blyth Valley in 1979 with the honour conveyed upon HMS Onslaught, an 'O' Class Submarine. Shipbuilding in Blyth continued until 1966 when the shipyard was closed during the economic slump which saw the closure of 28 north east shipyards; Blyth had been named one of the North East’s largest shipyards!

Due to the decline in the port based industries which had formed the staple of Blyth, other areas had to step up to fill this gap in the economic void; for example, major restoration has taken place in Blyth since the 1980’s, with the development of the Keel Row shopping centre and the market place which recently underwent a major refurbishment. The Quayside has also underwent major restoration and now boasts office buildings, artwork created by local schools and the ‘Spirit of the Staithes’ which was unveiled on 28th May 2003 by Princess Anne.