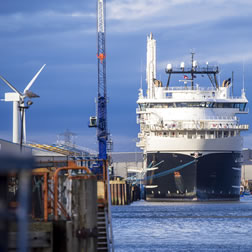 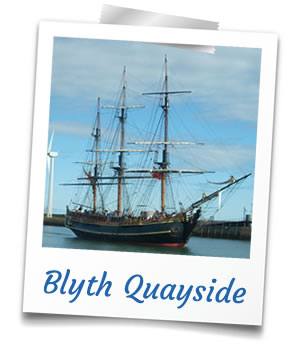 Blyth Quayside is an area that runs parallel to the eastmost point of the river Blyth. It is still referred to as the “river” by locals even thought the estuary of the river is closer to Bebside – a village to the west of Blyth – where the tidal limit reaches. Large parts of the water on the curve of the river are not accessible on foot until the Quayside due to an area owned by The Port of Blyth and Catapult – both of whom are heavily involved in the renewable energy movement.

The Quayside begins alongside Arms Evertyne Building, home to Blyth Police and Blyth Town Council, and runs half a mile to north entrance of the Port of Blyth.

The 18th century saw the beginning of the development of the port with the construction of quays, breakwaters and piers. As the local coalfields expanded, so did the port and town. Shipbuilding and shipbreaking become essential, and the building of the staithes was undertaken to aid transport of coal by rail. Coal shipments peaked in 1961 when 6,889,317 tons were shipped.

At one time home to the famous West Blyth Staithes, a construction built for the North Eastern Railway Company between 1910 and 1923, the Quayside has since seen much redevelopment. Gone is the old power station and where the staithes were a beautiful walkway runs towards the home of the Tall Ship project and RNLI Blyth Lifeboat Station.

The Quayside is now home to a public sculpture known as the “Spirit of the Staithes”. Created in 2003 by Simon Packard, it is composed of several segments, and when viewed from Wellington St East, visitors can see a coal-powered steam engine.

While the “Spirit of the Staithes” is impressive, it is dwarfed by the wind-powered turbine located across the river. At 76m high with a diameter of 104m, the Senvion 3.4M104 windmill generates 3,400 KW per hour for the national grid.

Today thanks to significant work by the Port of Blyth, and a tight partnership with offshore renewable energy giants Catapult, Northumberland County Council and Advance, Blyth is at the forefront of the offshore and renewable energy sector. The area was the first in the world to have offshore turbines and in 2019 saw the worlds largest turbine blade – 107 metres in length – arrive for testing at ORE Catapult’s Blyth test facility.

The continued development of the Port, Quayside and the surrounding area has led to additional gems appearing on Blyth’s landscape. A walk further up Quay Road uncovers the spectacle that is the Blyth Tall Ship. The Williams II is a 100-year-old wooden Baltic Trader that the members of the Blyth Tall ship project have lovingly restored as part of a heritage and education programme from their base on the Quayside.

The team hope that the Williams II can one day recreate the journey of the historic voyage of the original Williams, a Blyth Tall Ship that was responsible for discovering Antarctica in 1819.

The project started in 2009 to help develop the skills of young people and has rapidly become a fully blown apprenticeship scheme, with 3 NVQ courses in Marine Engineering. With their Tall Ship, a refurbished heritage boat workshop, dedicated staff and a considerable following of volunteers known as “the Friends of Blyth Tall Ship” the project has been responsible for transforming the lives of countless young people and regularly adds to the community spirit with their open days and charity work.

Beyond the Tall Ship, Boathouse is the RNLI Life Boat Station. Established in 1826, it is another stalwart of Blyth's rich cultural marine heritage. With over 16 awards for gallantry, two inshore lifeboats operate all year round protecting residents and visitors to Blyth who fall foul to the perils of the North East sea.

The RNLI volunteers run a gift and souvenir shop that includes homewares, clothing, toys and memorabilia that helps support the excellent work of all involved at RNLI Blyth.

There is ample parking at the Quayside, a local restaurant overlooking the harbour, and Blyth's Commissioner Quay Inn Hotel. With 40 en-suite bedrooms, regular entertainment, high-quality food and a Sunday Calvary there has never been a better time to visit and stay in Blyth.