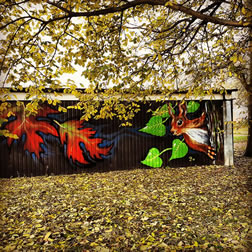 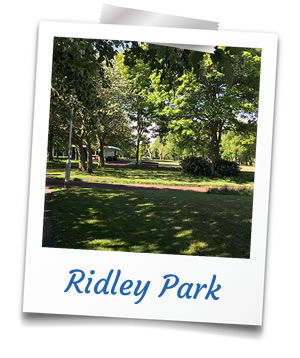 Known originally as the “Flats and Links”, Ridley Park began its life as an area of waste ground west of the Blyth Harbour and Dock Company. Previously a congregation point for miner’s picnics, visiting fairs and circuses, South Blyth Local Council leased it from Viscount Ridley for railway expansion.

It remained out of public access until the autumn of 1903 when Viscount Ridley gifted the deed to Blyth Urban District Council on the proviso that it only be used as a park.

Blyth Ridley Park officially opened on the 27th of July 1904. An area that covers 5.5 hectares, the park is mostly flat, sloping gently toward the eastern boundary it shares with the Port of Blyth. Separated from the River Blyth and sea by the port facilities, the park is afforded protection from adverse weather due to its positioning.

The park is well maintained and clean with two dedicated play areas, a splash water play area, tennis court, basketball net, two pavilions and toilet facilities. The pavilions retain much of their original look and are still in use today. The first is run as a café while the other is a base for a community charity known as the Friends of Ridley Park.

The Friends of Ridley Park (FORP) work with Northumberland County Council maintain and upgrade the park. They have been responsible for adding bird boxes and a bird feeding station as well as introducing educational boards such as the Park Tree Trail board.

The park has a large number of mature trees around much of the perimeter with most of the stock being deciduous. Some traditional coastal species also exist in the form of Elm, Sycamore and Swedish Whitebeam. Many new species such as the English Yew, Black Mulberry tree and Tibetan Cherry tree are now available to see thanks to the FORP – local authority partnership.

The area isn't just a haven to wildlife; it is also home to several poignant reminders of Blyth's history. Memorials stand at the Northern end of the Park commemorating those that died during both World Wars. The Celtic cross stands next to these in recognition of 6 local servicemen that lost their lives in the Second Boar War.

Community artwork is prominent in the Park. The back walls of the main toilet block and FORP Pavillion are places of interest among the trees at opposite ends of the Park. Creatively adorned with murals of animals found in the area, the colours liven up the surroundings even in the dead of winter.

Sculptures also feature within its boundaries. In 2012 SUSTRANS funded the creation of three silhouettes of local heroes to remember them. These are Stan Laurel, P.C. David Rathband and Guardsman Michael Sweeney. All three contributed significantly to society and lived in Blyth.

Additional works of art found around the Park include two sculptures by locally based art group Northern Butterflies reflecting its biodiversity and heritage. A bust of Lord Ridley is located near the Park View entrance, paying homage to the contributions the family has made to Blyth over the years. Both projects were made possible thanks to FORPs voluntary work with the latter a replacement of the original statue stolen early morning in July 2008.

Ridley Park is a beautiful place to visit at any time of the year. The birds hastily arrange nests in spring, the rose and wildflower gardens bloom in the summer. In autumn the air dances with multi-coloured leaves while in winter the silhouettes of the naked trees augment the moon. A romantic location regardless of the month or weather, a walk through the Park is guaranteed to lift spirits.

Visit Ridley Park in Blyth, and you can find the following:

Dogs are allowed in the Park, but owners must pick up dog waste (bins provided) and are not allowed to enter play areas.

Free car parking for 70 cars is available at the south end of the Park off Wensleydale Terrace/Belgravia Crescent.

Public facilities are available on site.