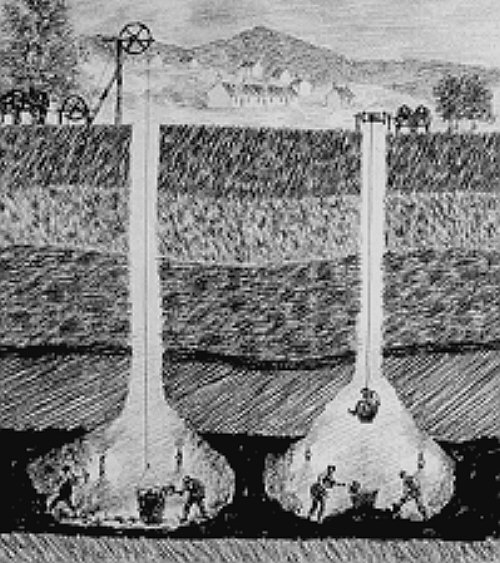 It is a well-known fact that Plessey Road, stretching all the way from Blyth town centre to Newsham (2.4 miles) was laid down along the course of an old wagonway. It causes an odd appearance to what should be a gridiron layout to the streets of the town. The course of the road continues westward through Newsham fields as a modern-day footpath. There are also some earthworks remaining at Boghouses which was originally part of a wagonway bridge across the Horton Burn.
Interactive Map of Plessey Wagonway (may take a few seconds to load on some devices) or click here for larger stand-alone map

The wagonway started at Plessey Checks, a distance of five-and-a-half miles from Blyth. It has obviously had a great influence on the layout of the landscape, even up to the present day, but no obvious trace of any former industrial activity in this area would indicate why such an expensive undertaking as the construction of a wagonway was ever needed. Today it is a barren, rural area with a large roundabout at its centre. Plessey had once been a thriving coal mining area with a village of miners' cottages at its heart. What could I find out about the Plessey pits?


The subject had been studied by Janet Bleay for the book Plessey: The Story of a Northumbrian Woodland (1981). There is an outcrop of a very rich coal seam on the south bank of the River Blyth at Plessey. A geological fault throws this seam down 30-60 ft on the north bank where the Plessey Woods Country Park is now situated, so the early mining activity was concentrated on the south bank where the coal was more easily accessible.


Mining had taken place here since medieval times, mostly by the monks of Newminster, near Morpeth, who had been granted rights of mining in the area. The operation was primitive and small scale in these early days. Drift mines were dug along the seam where it outcropped or a bell pit was sunk vertically. The bell pit was so named because it resembled the shape of a bell when seen in cross section. A small shaft was sunk down to the seam and then coal was dug out as far as was possible to go until the roof was likely to cave in or the air became too foul with suffocating gases. Coal and men were hauled up to the surface by means of a windlass with a large wicker basket attached to the rope.

When the bell pit had reached its limit you then dug another a few yards further along.


Technological development meant that as time went by pits could become deeper and the coal dug further away from the shaft into the seam. The developments were: propping up the roof of the mined seam; ventilating the pit by means of lighting a furnace which used rising hot air to create a draught, air shafts were also sunk; and using engines to pump water from the workings, although in the 17th and probably even in to the late 18th centuries this would have been a horse engine in an arrangement known as a cuddy's wheel or horse gin.


Even by 1813 when the pits ceased operation and the wagonway was ripped up the workings were not extensive. Thirteen pits were in operation in this year working by the rib and stall method. But still the extent of the workings were only tens of yards from the shaft bottom. Steam engines were by this time in common use to pump water and haul men and coal up the shaft. Deep mining had been started at Cowpen in 1794 and with the pits at Plessey being almost exhausted the owners agreed to close.

Charles Brandling was the proprietor of the mines in 1663. He was a landowner from Gosforth, near Newcastle, with extensive estates. Presumably not much coal could have been shipped via Blyth in those days? Roads were just cart tracks that became muddy during the winter season. Carts carrying coals would have soon become stuck axle deep. Long journeys were impracticable.

In 1692 the Blyth Coal Company was formed, although we know little of the organisation. Between that date and 1709 the Plessey Wagonway was laid down to allow coal wagons to run on rails. According to the Blyth News' "Story of Blyth" (1957) "The wagonway was made of a double line of beech rails laid on oak sleepers. The wagons had wooden wheels into which nails were driven to prevent wear and tear. Each wagon was pulled by one horse and driven by one man. Three journeys, or gaits, was a day's work. The first quay on this side of the river was constructed at the end of the way. There the coal was unloaded from the wagons and later loaded from barrows into the ships. This practice was continued till the building of a staith some years later." WR Sullivan in "Blyth in the Eighteenth Century" (1971) states: "As early as 1772-73 there are references to loading there from some kind of 'spout'. In 1784 we have a detailed account of expenditure on a 'staith'.

The Ridley family purchased the Plessey Colliery in 1722 and the following year bought the estate of Blyth. They were entrepreneurial and poured much investment into the development of the town and their business interests. In the first year they sent 58,000 tons of coal along the wagonway to Blyth. Although there was a significant domestic sale of coal most of it was sent via sea routes from Blyth.

Wagonways, however, were expensive undertakings and a major investment. In 1783 the upkeep of the Plessey Wagonway reached £1140 (roughly £230,000 in today's money) £843 the following year and £830 in 1786. Wayleave was also expensive and Lord Delaval demanded £300 per annum for the wagonway to go over his lands at Horton. Even after a series of not very friendly negotiations Ridley was not able to get this amount reduced and he proposed another, alternative, route "missing out this awkward gentleman's land altogether". The alternative route was never carried out.

Eneas MacKenzie writing in 1825 gave a statistical account of the parish of Stannington:


"For the great decrease in the population of the parish as compared with the last census of 1811, I can very satisfactorily account. About eight years ago a very extensive colliery in the South Division and townsip of Plessey was (what is technically called) laid in - that is discontinued to be worked or carried on; from which circumstances about 300 pitmen removed to the chapelry of Cowpen, where a fresh pit, or colliery, was opened, and where they continue to dwell."

The old housing was quickly removed although the old Three Horse Shoes pub and smithy buildings remained in place at Plessey Checks for quite a few decades after closure serving the Plessey New Houses to the south of the site. 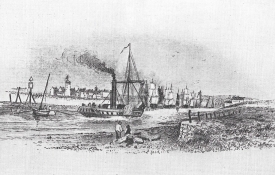 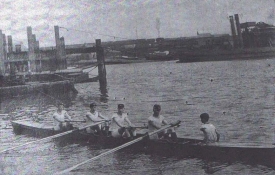 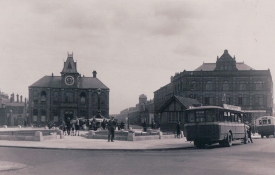