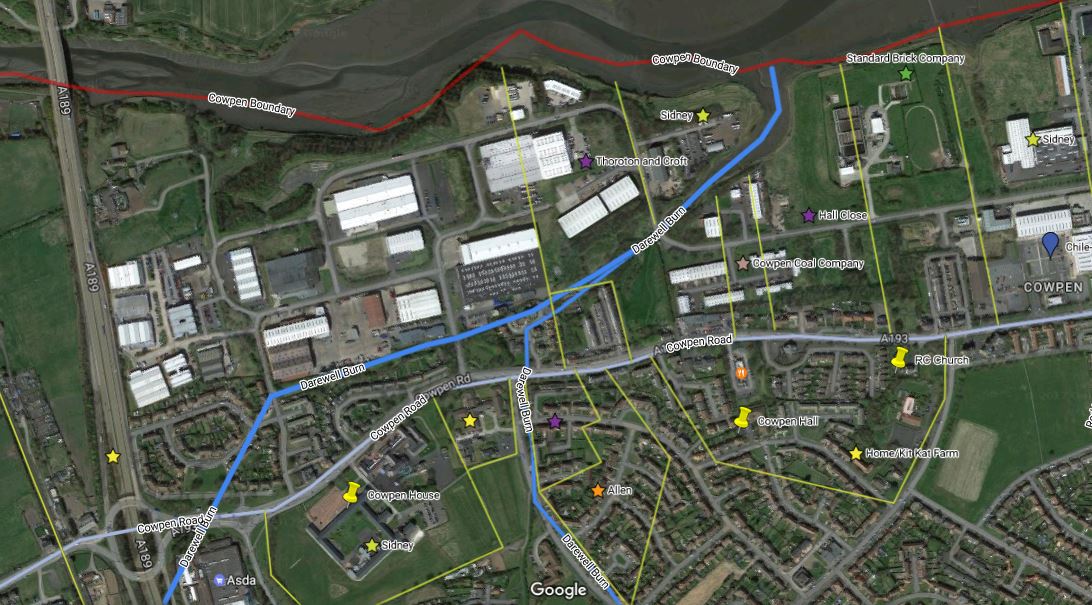 
On 15th November 1619 the major freeholders of Cowpen gathered at nearby Horton Church to sign an agreement between themselves. It was an historic meeting with major implications for the future of the township.

Sir Ralph Delaval knight, Robert Widdrington esq, Lewis Widdrington gent, Tristram Fenwick gent, Martin Fenwick gent, John Preston, Cuthbert Watson, William Story and Robert Smith yeomen agreed to divide the common lands between themselves and create individual farms. They voted to appoint William Matthew, a surveyor of Newcastle, to "survey all the lands in Cowpen aforementioned and to allot and set forth every man's part according to the purport and quantity of his freehold". A number of the major landholders of the district were also present to witness the signing of the document and to settle disputes and act as commissioners, including Sir Thomas Riddle, Roger Witherington esq, Mark Errington esq, Thomas Ogle esq and Oliver Killingworth gent.

The partition took place on the 1st of March of the following year.

The lands of Cowpen had been farmed in common since at least the 13th century. This had been the usual method of farming in this district imposed upon the population after the Norman conquest. But this was a particularly archaic form of common, open-field farming called a run-rig system whereby the strips of land allocated to each tenant were scattered throughout the large, unenclosed, open fields. Unlike most areas farmed in common where the fields were more planned, some being periodically left to lie fallow and divided into arable and pasture areas, in the fields of Cowpen there was no distinction between arable and grass lands. Freeholders lands were mixed with those of the customary tenants. There was, however, some mention of individual tenements, or closes, having being formed in a piecemeal way by this date. Malvin's Close is the obvious example.

There had been initiatives shown by investors in coal mining in the area. These would be small-scale operations consisting of bell pits sunk to a depth of only 15-20 feet below ground, but even so, the shifting nature of landholding under the run-rig system was not conducive to colliery enterprise.

The Delavals had also by now acquired over half of the township, although they had held a substantial portion since the 13th century, but now wanted to improve and consolidate their holding.

The time was ripe to split the land into individual farms and enclose the fields with fences and hedges. This was a common practice throughout the country between the 17th and 19th centuries and it was perhaps the most important development to happen in any area. Smaller landholders were often unable to afford to enclose their land and would sell up. Tenants without security of tenure were often evicted to be replaced by labourers or the holding would be turned over to sheep farming.

The farms created in Cowpen were the ones which survived, more or less, until the 20th century. A small amount of exchange and consolidating of holdings took place, especially to create High House Farm and South Farm was created out of the undeveloped South Moor, so the exact dates aren't as yet known. The division was as follows:

1623: A windmill and land was purchased on behalf of Alice Delaval at the far end of Cowpen Township in the High House Farm area. Originally part of the Prior of Tynemouth's lands it had been granted to Braddock and Kingscote by the Crown. The windmill had been erected in 1598. This was owned by the descendants until 1865. A right of common on a small piece of land at Darewell Burn was also acquired.

1624:  Sir Ralph granted the lands to his brother Thomas Delaval of Hetton-le-Hole to be bequeathed to the heirs of Thomas.

1629: Another brother of Sir Ralph, Robert Delaval, also held lands here from 1619 although not mentioned by name in the allotment document. He resided at Cowpen in a hall opposite where the Windmill Pub Grocery Shop and Greggs now stands. He died in this year leaving the property to his wife and on her death his daughters who continued to reside at Cowpen. The eldest daughter, Mary, married Sir John Mitford of Seghill. On his death she married Colonel Edward Grey, who was labelled a traitor during the English Civil War. He came to reside at Cowpen after the war ended. She died childless in 1649.

1650; The second daughter of Robert Delaval, Elizabeth, became the heir to the estate on the death of her sister. The lands were conveyed to her husband Sir Francis Bowes of Thornton and merchant adventurer of Newcastle.

1652: The lands originally held by Thomas Delaval of Hetton-le-Hole were surrendered in reversionary interest to Sir Francis Bowes who now became the sole landholder of the whole East Division of Cowpen. The estate was held by succeeding generations of Wanley-Bowes family. (History of Northumberland Vol 9 p330)

1779: Estate Jointly inherited between sisters Anne Wanley-Bowes, who married  Thomas Thoroton, Lieutenant-Colonel of the Coldstream Guards and Elizabeth Wanley-Bowes married to Rev Robert Croft. Both families resided at York. Rev Robert Croft was the last surviving landholder and the estate was managed by trustees of the family after this date. Both ladies left issue.

1799: Two closes were purchased at Bucks Hill by Richard Hodgson from the Croft family to build a mill on this site.

1619: John Preston the elder was allotted 94 acres pasture and arable and 11 acres meadow and John Preston the younger was allotted 193 acres arable and pasture and 23 acres meadow in the Middle Division of Cowpen Township. The Prestons were originally named Prestwick and were members of the Harbottle and Ward families who held land in Cowpen from 1498.
1659: John Preston sold the farm to his brother-in-law John Proctor.
1679: The farm was sold to Edward Toll of North Shields. The estate descended in the female line to Mrs Dockwray. She bequeathed the farm to her son Thomas Dockwray, vicar of Stamfordham. On his death and after the death of his wife, the undivided holding was owned by his sisters Elizabeth Harbottle, Mary Charlton and Martha Dockwray. By 1790 William Harbottle had become the sole owner of the farm.
(History of Northumberland Vol 9 p347)

1874: The farm was sold to John Hedley of Blyth. He later became bankrupt and the receivers conveyed the property to the Standard Brick Company.

1619: Robert Smith was allotted a small holding of 21 acres pasture and arable and 2.5 acres meadow. This was adjoining the main highway through Cowpen beside the Windmill Inn where Craigmill Park now stands. It survived until the 1970s, although much reduced in size even by the time of the 1st edition OS maps of 1860s, and was known as a small market garden. It was often referred to as Kit Kat Farm, although the 1960 OS plan labels it Home Farm.

1619: Malvin's Close, before the division, must have been a more extensive area of land than what was turned into a farm. Sir Ralph Delaval, of the East Division, was assigned 66 acreas in Malvin's Close and Lewis Widdrington, of the Middle Division, was assigned 19 acres pasture. But it was John Preston, also of the Middle Division and the holder of Cowpen Town Farm, that came into possession of what became known as Malvin's Close Farm.
1765: Edward Preston, of West Boldon, sold the farm to Edmund Hannay, shipbuilder of Blyth.
1798: Edmund Hannay devised the property to his daughter Mary, wife of Edward Watts of South Blyth. It is often referred to as Watts Farm in many publications.
1873: Sold by Edmund Hannay Watts to the Cowpen and North Seaton Coal Company.

1619: Lewis Widdrington of Cheesburn Grange, a scion of the Widdrington family of Widdrington, was assigned 11 acres meadow in the East Field, 13 acres arable in the Chile-lawe behind Lewis Widdrington's house, 11 acres arable in a field called Dollacke, 19 acres pasture in Malvin's Close, 24 acres in the plain moor adjoining to the Dammes, 27 acres pasture in the South Moor. In total 94 acres pasture and arable and 11 acres meadow. This was in the Middle Division of Cowpen.
1665: Sold by the trustees of Sir Thomas Widdrington of Cheesburn Grange (about 15 miles west of Cowpen) to Anthony Hedley of Newcastle.
1686: Sold by the son of Anthony Hedley to Peter Potts.
1725: Sold to Stephen Mitford of the Inner Temple.
1729: Sold to Henry Sidney of the Temple. The Sidneys were the main landholders and influence on the area for the next two centuries.

1628: The lands were mortgaged to his brother John Widdrington of Plessey New Houses (5 miles to the West of Cowpen), who at a later stage came into complete possession of the estate. This also included Bucks Hill in the East Division.

1642: John Widdrington exchanged some lands with Cuthbert Watson of the neighbouring High House Farm to consolidate the lands into a single area.

1663: Held by William Widdrington of the family of Hauxley (10 miles to the North of Cowpen). Lands carried by marriage to William Fenwick who sold to Sir John Swinburne of Capheaton (19 miles to the west of Cowpen).

1687: Peter Potts purchased the estate of Robert Fenwick of Cowpen. The  lands had been part of the small allotment made in the West Division to Martin and Tristram Fenwick. This could also be known as part of High House Farm.

1695: Sold to Peter Potts, who had also acquired Red House Farm in Cowpen. Potts was a Newcastle merchant and the probable builder of Cowpen Hall.


1725: Sold to Stephen Mitford of the Inner Temple.
1729: Sold to Henry Sidney of the Temple. The Sidneys were the main landholders and influence on the area for the next two centuries.

1619: The lands in this West Division of Cowpen Township were originally granted to Cuthbert Watson, William Story, Martin Fenwick and Tristram Fenwick. Watson and Story were from Berwick-upon-Tweed and came into possesion in 1591. During the proceeding decades the allotments of land were eventually consolidated into one holding. Cuthbert Watson was granted 11 acres meadow in the North Field, 4 acres arable in the High Croft, 62 acres in the Whins adjoining Bebside, 24 acres arable in a part of the Mill Field known as Galliflat. Martin and Tristram Fenwick were granted 5 acres meadow and arable on the East side of the North Field, 41 acres pasture in the West Whins. William Story was granted 11 acres arable and meadow in the North Field, 23 acres arable in the Mill Field, 69 acres pasture in the West Whins.
1623: William Story sold a small field to Alice Delaval, the owner of the East Division, called Mill Bank and the right of common in a meadow field by the Darewell Burn.
1639: Story sold the remainder of the holding to Robert Preston a  plumber of Newcastle.
1701: Robert Preston a master mariner of Newcastle sold the holding to Trinity House, Newcastle. The farmhold at the East end of High House Farm comprised Mill Nook, Hayston Letch, North Field, North Bank, 2 closes in Cowpen Town called Preston Lands.
1712: The whole of the West Division was purchased by Cuthbert Watson, holder of the West High House Farm.
(History of Northumberland Vol 9 p335)
1802: The land were inherited by the two daughters of Cuthbert Watson IV on his death. Dorothy married Charles Purvis of Newcastle. Margaret was married to Rev Ralph Errington also of Newcastle.
1854 The two families made a partition of the estate. The Errington family took Cowpen House, which presumably had been known as Preston Lands in 1701. Dorothy Purvis had married John Anderson and they took Cowpen High House Farm. This was still held by the Anderson trustees in 1909.
1857: The Errington's Cowpen House was purchased by Marlow Sydney of Cowpen Hall. He was already a major landholder in Cowpen.
Send to Friend
Comments
Related 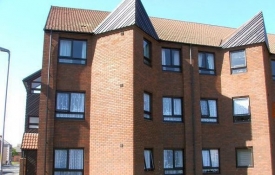 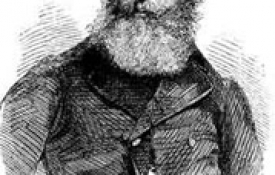 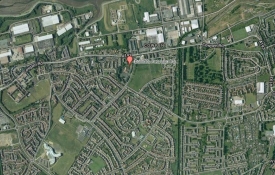 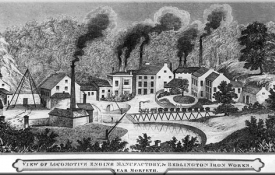