Re-live the sounds of the swinging sixties, as Britain's No. 1 tribute show brings alive the magic of the sixties, with their tribute to over twenty five bands of that era. The show encompasses everything from that period, from the clothes that were worn, to flashbacks from television history, including: TV programmes, adverts and even clips from the original bands.

The Counterfeit Sixties presents a showcase of the great bands of this unforgettable time. The fantastic music of The Beatles, The Rolling Stones, The Who, The Dave Clark Five, The Kinks and The Monkees - to name but a few - all recreated in this stunning show.

The band members have performed their unique tribute shows all over the UK and abroad, and have a wide range of experience in that field. The members of the band have individually worked with notable sixties’ artists such as The Searchers, The Ivy League, The Fortunes, The Tremeloes and many more. Join us for a night of sixties nostalgia!

If you’ve never been to a Punch-Drunk Comedy Event before, here’s why it’s time to get on board!

When 350 folk joined Gav and Kai Humphries for the first Punch-Drunk comedy event in Blyth on the evening of 19th January 2015, the brothers told them they planned to reconnect their community through the forces of Love and Laughter. 9 months worth of sold-out Blyth events and 2 new all-but-filled venues later the boys have made good on their promise.

The events have been sensational so far, Punch-Drunk Comedy has won national acclaim as the BEST LARGE COMEDY-VENUE IN THE NORTH and the Love and Laughter Movement has gained the attention of regional newspapers, TV and Radio. Why? Because the ever-growing Punch-Drunk Army have taken the Movement to their hearts as the hub of a new, collaborative pro-action to restore the energy and people power that lies within their communities.

The Punch-Drunk Army now support 4 crucial charitable Trusts and have donated to numerous other causes, with the fundraising total so far this year sitting over £10,000. Together they stock 3 local food banks from month to month by raiding their cupboards to bring donations along with them to each gig, all whilst reconnecting on a monthly basis to laugh until they cry.

If you live in Blyth, Bedlington or Ashington and haven’t been to a Punch-Drunk event yet, you can guarantee that one day, someone will ask you why you weren’t in on the National Social Rediscovery Movement that started in your hometown. 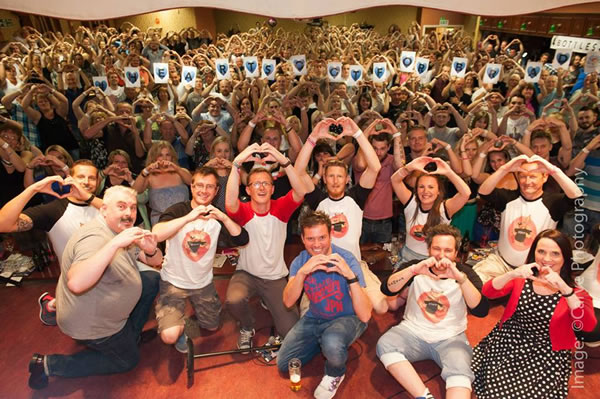